The council continues to waste ratepayers money on grandiose schemes that are crippling the city and its ratepayers. Inefficiency is rife throughout the organisation and stronger governance is required to pull the "big spending machine" back into line. I believe my senior management background in international business would give me the experience and skills to implement and oversee a much tighter and more efficient city council. 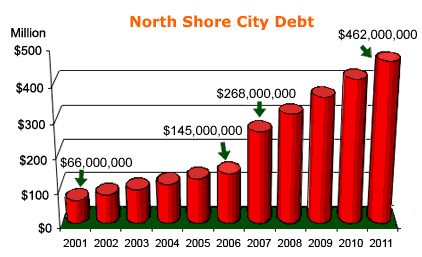 Some projects that should be cancelled or significantly downsized include:

In our first year my council changed the Treasury Management Policy to allow longer term 50 year loans for inter-generational funding of the city's infrastructure. This was a recommendation of the Shand Government enquiry into local body rates. As a result we were able to maintain investment in critical infrastructure required for a fast growing city, keep the rates at a lower level, and project for a year 15 debt level back around $356 million. During this same 15 year period to 2024, North Shore's assets will increase from $4.7 billion to $10.1 billion.

The $20M Albany Library was deemed not to be urgent in the short term while we had a perfectly adequate Albany Village Library, the lease on which we extended to 2019.

The budget for the Northern Swimming Pool complex was reduced from $15M to $10M and moved to years 2013/14. Subsequently, as a result of selling off our old Albany Works Depot for $14.4M, the council has approved funding to be brought forward for this community pool as well as funding being put into a 50 metre Olympic Pool at the Millennium Institute of Sport. So there will be two pools - a win-win for all concerned.

The Takapuna Causeway project was cancelled in my first year as Mayor as this was greatly opposed by local residents. Instead we put in place steps to safeguard the Esmonde Road bus lane and access to the busway, and also continued to progress the Anzac Street access to Takapuna.